WHY YOU NEED TO GET IT DONE SOONER THAN LATER

Hope everyone’s enjoying their MLK long weekend. In Canada though, it’s a regular ol’ Monday. My current situation though, as I write this Sunday night, is with the NFL playoffs playing in the background. My household kind of goes crazy for football, in particular, the Pittsburgh Steelers.

One of the playoff games was between the Dallas Cowboys and the Green Bay Packers. This particular game was tied up until 3 seconds left in the game when the Packers came up on top with a field goal. Funny thing is, they got possession of the ball with only 30 seconds left in the game. I had semi-checked out anticipating that the game would go into overtime. But not the Packers. It wasn’t over until the final whistle blew.

This taught me a thing about never giving up. I know I’ve personally kind of just shrugged my shoulders are certain situations assuming that it is what it is and I’ll simply live to fight it another day. But why? Not to say that fighting another day is bad, but what if you can get your victory today? Why wouldn’t you? Why prolong the struggle or the fight more than needed. The Packers could easily have said, “we’ll win during the overtime”, but there was no guarantee.

“Next” Year is THIS Year

There are so many things I’ve wanted to do that I’ve simply said “next year” too. Well guess what, “next” year is here! It’s THIS year. I’ve heard many say to start before you’re ready. And as backward that may sound, there’s a method to the madness, lol. The reason is, you’ll NEVER be ready. The Packers had 30 seconds before the end of the game, and you may only have 3 months left until that book is due to be released according to the plan you put in place last year.

Whatever the goal or mission, extending your deadline doesn’t guarantee a better outcome. I know books that were written in 3 days. 3 DAYS! And not a short story either, but a full-fledged book. How? Determination. (And using a transcription app). Talk out the message, don’t self-edit. When done, give it to an editor, and voila. Self-Publish and start promoting.

If you’re a perfectionist, and even if you’re not, something that sounds too simple may be perceived as not good enough. But why complicate things? The Packers had one job, get the ball to end-zone. There are probably a thousand different strategies and plays to make that happen, but with 30 seconds and a goal in site, all they could really do was GO. Whatever your goal, there’s probably a hundred ways to get it done. But don’t worry about that, just GO and get it done.

Another quote I’ve heard, “Done is better than perfect.” And with folks, get cracking; you can do it. 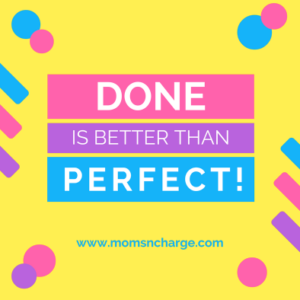 PrevWHERE DID THE TIME GO? LEARNING TO MAKE THE MOST OF YOUR TIME

WHY YOU NEED TO GET IT DONE SOONER THAN LATER

WHERE DID THE TIME GO? LEARNING TO MAKE THE MOST OF YOUR TIME

9 Easy (and Free) Ways to Love on Yourself